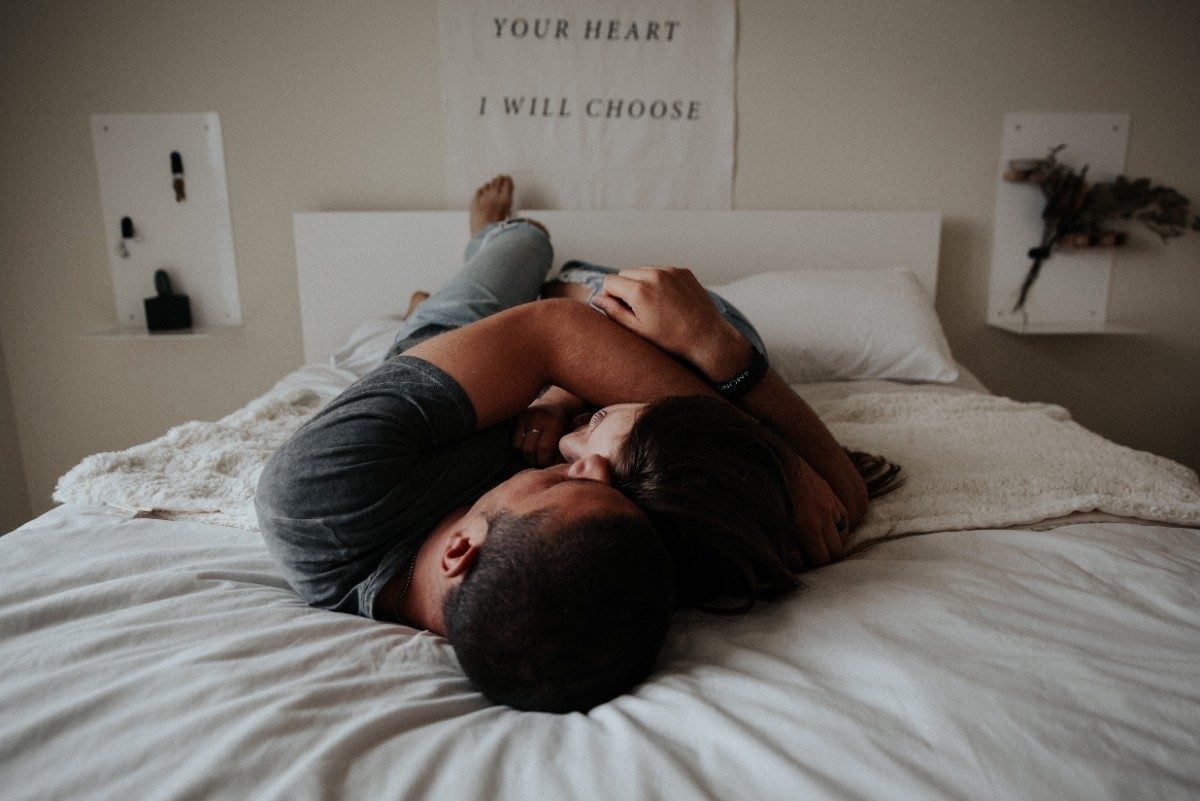 We probably don’t have to tell you this, but sex is pretty great. Not only does it fulfill our carnal desires for pleasure and intimacy, but it also has some pretty significant science-backed health benefits. We assume you’ve had a few rolls in the hay, so you probably have some anecdotal evidence to support the benefits of a good boinking. But did you know that there have been actual studies that support the different ways sex can benefit your health? It’s true! So strap in, because we’re about to cover the various ways sex can positively benefit your physical, mental, emotional, and sexual health.

Something to clear up before we start: A lot of articles boast the health benefits of sex, but what they’re really talking about are the benefits of orgasms and/or the benefits of penile-vaginal penetration. It’s important to note that 1) Not all sex results in orgasm 2) Not all sex requires penetration and 3) Not all sex includes vaginas and penises. Living as a cis woman in a heteronormative society, I understand how it can be easy to read “sex” and inherently see it as penile-vaginal penetration that results in orgasm. But, I ask that as you read this, be actively aware that there is no universal definition of sex that applies to each and every couple, and most of the studies cited relied on self-reported instances of sex. Therefore throughout this blog, I will be sure to note whether the study cited used mixed-sex and/or same-sex partners as their data sets; I’ll also include if the research provided a definition of sex to its participants; and if the benefits stated result directly from an orgasm, I’ll be sure to let you know.

I thought I’d start with the most obvious one: exercise and muscle strength. Sex is work. Don’t get me wrong, it’s fun work, but it’s work nonetheless. Which is why it’s probably not surprising that sex can count as exercise. Foreplay, stimulation, outercourse, and intercourse (plus all the other aspects of sex) involve stretching, increased heart rate, and some form of physical exertion. If you’re out of shape, you might even be a little sore after knocking boots, comparable to how you’d feel after a good gym session. Of course, you get out what you put in (no pun intended), so the more strenuous the sex, the more benefits your muscles will get.

However, I don’t suggest that you completely ditch the gym for the bedroom (or wherever it is that you like to get it on). Studies cited in this paper found that, on average, mixed-sex couples spent a mere 19 minutes having sex (including time before and during penetration). Which is probably not as long as your average gym session. The same paper cited a study that found the average length of female, same-sex encounters was 57 minutes, but that the sex was much less frequent than the mixed-sex couples. Which is probably not enough regular exercise to substitute for the gym. So really, consider sex as a supplement to your regular exercise routine, not a substitution for it.

Sex not only helps improve the current state of your heart, but it can also prevent heart disease later in life. One study found that women who had “quality” sexual encounters (defined as encounters consisting of physical pleasure as well as emotional satisfaction) were more likely to be protected from cardiac events later in life.

Studies focusing on men found that men who had sex two-to-three times per week were less likely to experience a cardiac event than men who had sex once a month. Another study looked at the long-term effects of sex on heart attack survivors and found that men who had more sex were more likely to live longer. Both studies suggest that not only the quality, but the frequency of sexual encounters may aid in heart health. However, keep in mind that the data didn’t measure if the participants were in long-term relationships, offering mental and emotional support which could contribute to health and longevity. Neither study defined “sex,”nor did they designate if the participants were in same-sex or mixed-sex relationships.

Sex can increase your antibody count! In case you’re unfamiliar with the term, antibodies are produced by the body to fight off diseases, and, it turns out, they can be increased with sex. A study done at Wilkes University found that students who self-reported having sex frequently (one-to-two times per week) were found to have significantly higher levels of antibodies than students who reported having sex less than once a week and more than two times a week. This is, of course, looking solely at the frequency of the sex and not at the quality of the sex. In addition, the study did not define sex, didn’t mention orgasms, and didn’t state if the participants were in same-sex or mixed-sex relationships.

It’s no secret that hormones impact with sex. Hormones dictate a lot of the sexual processes our bodies go through, from arousal to orgasm (and beyond!). But, the hormones released during sex can also aid in the health of your skin and hair.

Estrogen, released by both women and men during sexual encounters, helps improve the quality of the skin, impacting its thickness and collagen content, thus aiding in the prevention of aging.

Estrogen not only helps with skin health, but it also helps with hair health. In fact, multiple sex hormones affect hair growth, including testosterone and progesterone. But, studies are mixed, showing estrogen linked to hair growth and hair loss, with the same for testosterone. So if you’re having sex for the sole purpose of healthy hair, you might be in a bit of a hairy situation. Sex also reduces the amount of cortisol (stress hormone), and being less stressed definitely aids in skin health and hair growth.

Without bringing hormones into it, the exercise component of sex can lead to improved skin and hair. Doing the deed causes blood flow which leads to an oxygen boost that helps the skin and hair. Blood flow and oxygen nourish the hair follicles and skin cells causing healthier hair, a brighter complexion, and an immediate “after-sex glow.” Maybe she’s born with it, maybe it’s sex?

Sex can help with migraines and cluster headaches! In a survey, researchers found that “sexual activity can lead to partial or complete relief of headache in some migraine and a few cluster headache patients.” Another researcher found that orgasms could treat women who were experiencing pain. She studied pain from whiplash, arthritis, labor, and post-operations. The relief only lasted about 8 – 10 minutes, but it still sounds like some sweet relief.

Sex can really help your bone strength (pun clearly intended). The release of estrogen from sex has been linked to women having less instances of osteoporosis in their later years, as well as arthritis.

The mere physicality of sex can lead to a reduction in stress. Just as physical exercise works to reduce stress hormones (like cortisol)  and increase the production of happy hormones (like endorphins), sex causes the same effect. And, in case you don’t know, endorphins make you happy and happy people don’t shoot their husbands; they just don’t! *We don’t recommend using the fact that your client had regular sex as a defense in your next trial*

In addition to endorphins, sex that includes emotional support and physical satisfaction can also help by providing a coping resource to alleviate the negative effects of stress. And stress can have a negative effect on your physical and heart health; the reduction of stress through sex provides both mental and physical benefits!

Oxytocin, prolactin, dopamine, and progesterone all come out to play during sex. These hormones are responsible for creating a sense of relaxation and relief. After you get these babies in your system, you’ll be fast asleep. The hormones are released during sex and are linked to greater levels during orgasm which is to say sex itself can contribute to great sleep, and sex with an orgasm can contribute even more.

In addition to the hormones that help improve sleep, the pure physical exertion of sex can aid in slumber. Long amounts of strenuous sex can lead the body to exhaustion, promoting a deeper, more intense sleep.

As we get older, our brains begin to lose their plasticity, which makes it harder for us to remember. One study shows that sex could help combat that. The study found that people who reported having more sex (including greater sexual quality) performed better on an assessment of their short-term memory than those who had less sex. The findings were especially true for older adults.

Also, in a study of adults aged 58 – 94, it was found that those who were still sexually active had higher brain power than those who weren’t, and a study in 2010 found that sexual activity promotes cell growth in the hippocampus, the area of the brain that controls long-term memory, short-term memory, and spatial memory. None of these studies stated whether the data was comprised of mixed-sex or same-sex couples.

Oxytocin, the hormone most notably responsible for producing feelings of love, bonding, and connection, is produced during sex.

The release of this hormone triggers feelings of love, trust, and intimacy, which lead to an increased connection between you and your partner(s).

Depending on the sexual quality, the oxytocin release could affirm the reduction of stress associated with stable emotional and social connections.

Oxytocin floods the brain during orgasm, but studies have shown that it plays a part in arousal as well, even linking the hormone to erections and nipple stimulation. So just know you don’t necessarily need to reach that big O to receive the benefits from this big O.

Yes, it’s true! Sexy time can help you feel happier! This is by no means an endorsement to throw away your meds and start taking a dose of D instead. But, sex releases dopamine, serotonin, endorphins, and other hormones that make your brain happier. Maybe the next time you’re feeling a little blue, you can ask your person for a personal dose of anti-depressants.

Sex is definitely not a cure-all when it comes to the ailments of the human condition, but its benefits can’t be ignored. From the physical health benefits that doing the deed inherently has, to the hormones that make you feel good afterward, quality sex has been scientifically proven to have positive effects. As if you needed another excuse to get it on. Now go out and enjoy the physical, mental, and emotional benefits that sex offers! But before you do, be sure you know your partner’s status. Quality sex can only occur if there’s communication and trust involved; having unsafe sex can cause more negative effects than positive ones.