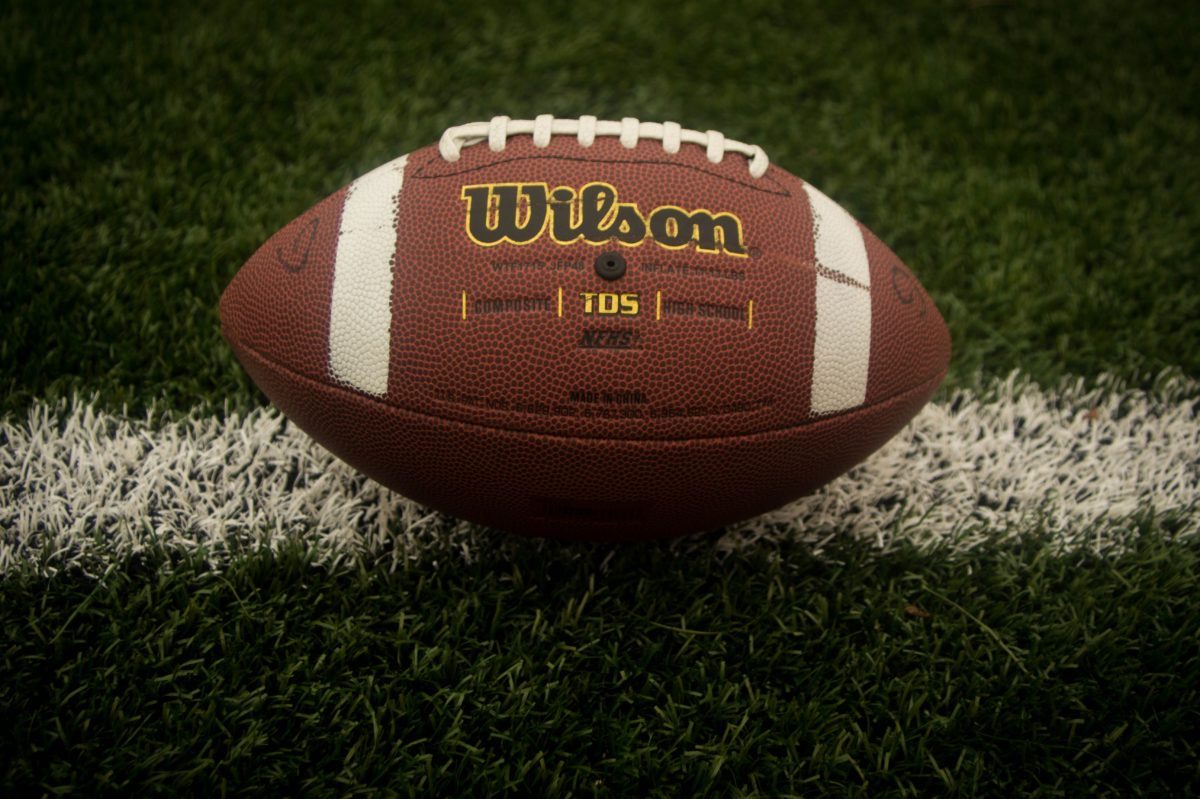 There’s nothing like comradery and competition… it’s all about owning those 365 glorious days of bragging rights. While you have no true control over if your team wins or loses (unless you’re on the team), you feel as though you are a part of the team. They can hear you yelling through the TV, wearing the lucky T-shirt does affect their scores, and hating the opposing team with a deep passion really and truly shapes a triumphant atmosphere that your team uses to win on the field.

Now, the games that you usually watch on TV aren’t exactly like the game we’re playing here. In this one, everyone was drafted the moment of their first sexual encounter and, unlike most sports, you don’t want to get the highest score.

The following list shows the best-known college rivalries, but this time we’re looking to see who’s got it “going on” but like.. not in a good way.  STDs, we are talking about sexually transmitted diseases, people.

Remember, the intent of this blog post is not to stir up hate, but to bring more awareness to the alarming state of sexually transmitted diseases.

In the past, we have done a blog post similar to this in 2015, but this time we researched the facts and not just general suspicions for satire. We found this data using the CDC’s updated atlas to look for chlamydia and gonorrhea’s rates per college’s county, added the two rates together, and then pitted the rivals to determine a winner.

Okay, to be clear: When we say, “the winner is” it means they had the most amount of STDs. 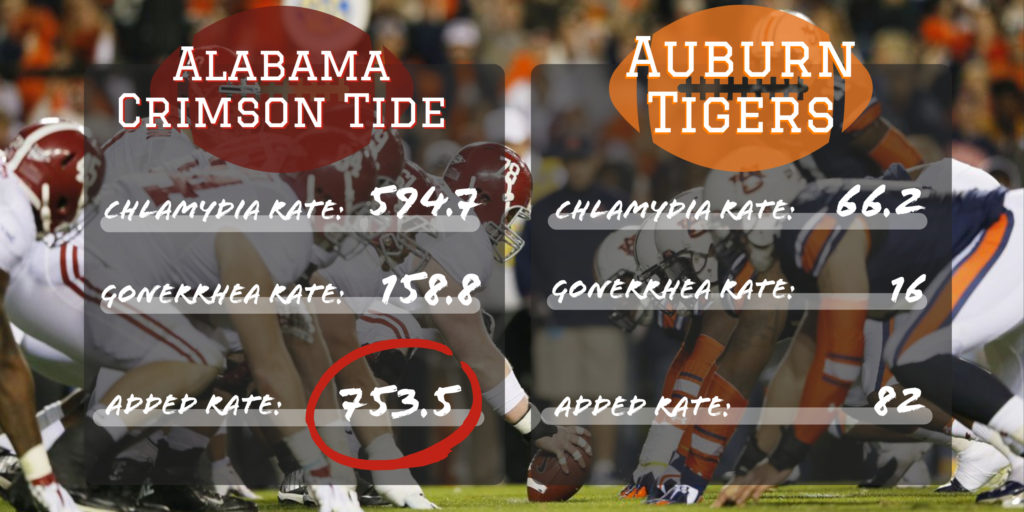 These Universities are only a three-hour drive away from one another yet their STD rates are quite contrasting. The clear winner for this matchup is… ‘Bama! Maybe that tide should roll on a few more condoms (PSA: Only wear one condom at a time). While rivalries can lead to things like Auburn’s oak trees getting poisoned and then, on a whole separate occasion, lit on fire until their unfair demise, we wonder what rivals will think of this kind of competition. “Oh yeah?! We’ll show them!!!” *practices safer sex* ‘Cause that’d be great. 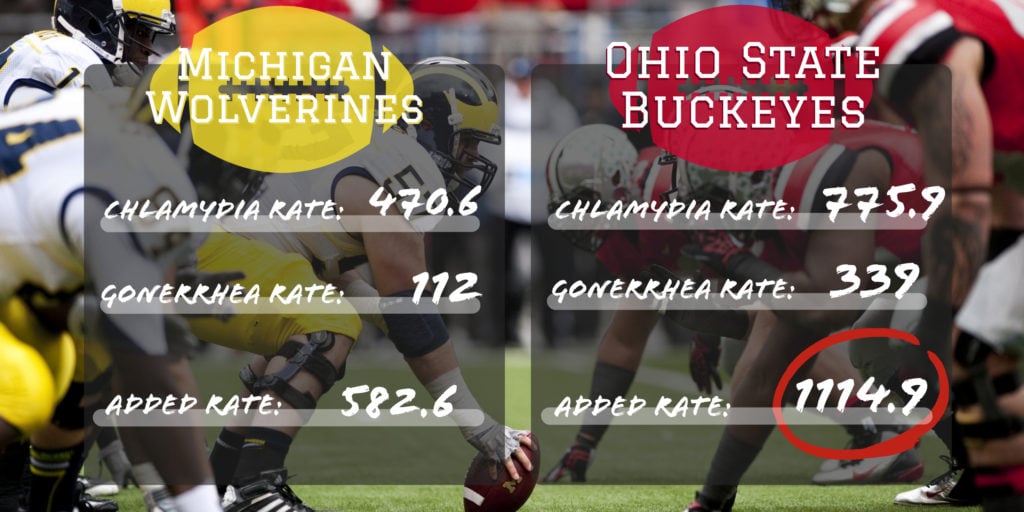 Ohio State… We’re happy you’re getting it in, and we know that coach says the best defense is a good offense, but in the bedroom, the best offense is using defense (condoms, if that’s not clear). We know you know about the drawbacks of not using protection, but have you considered researching the multitude of benefits from using different forms of barrier protection. Have you? Have you? 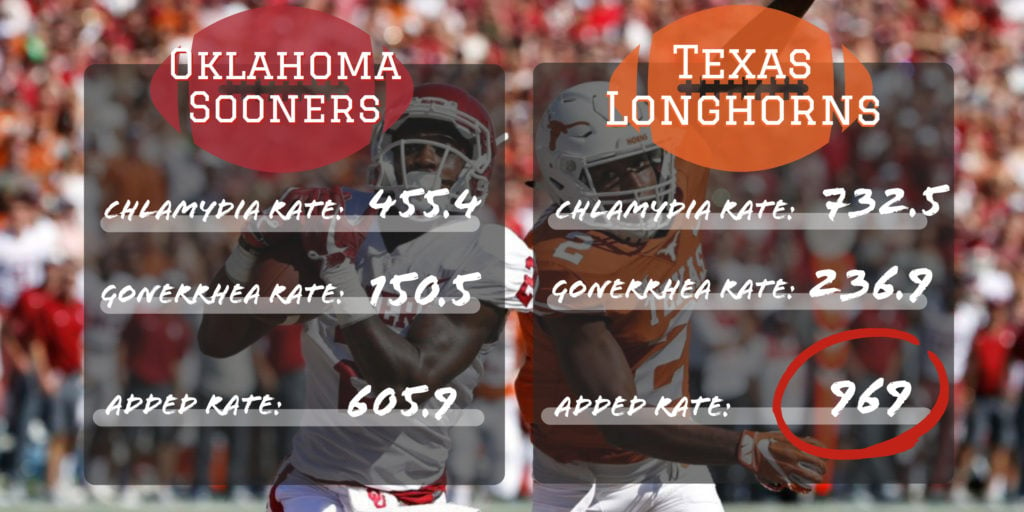 This one goes out to you, Texas. Red River Showdown, Red River Rivalry, Red River Classic, Red River Shootout, whatever ya call it, if you’re dealing with a “red” “river” you should probably get tested. Blood in urine or unusual bloody discharge is a sign of a bacterial STI like chlamydia or gonorrhea. 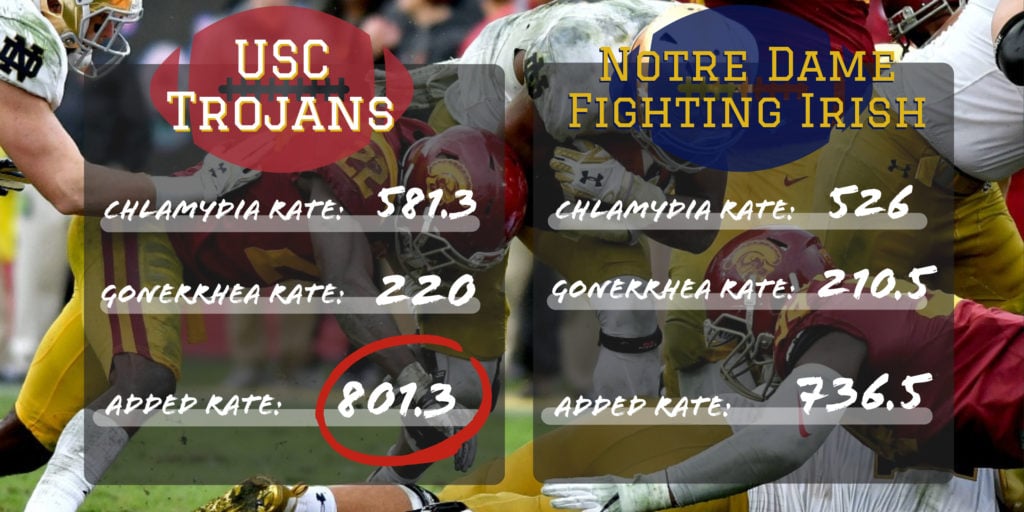 USC… remember that time that the star point guard, Gabe Pruitt, got Catfished by a rival team posing as a woman named “Victoria.” Pruitt’s confusion with Victoria ended in USC’s downfall, and that idea seems to repeat here. USC, if you keep getting distracted by pretty blondes, you’re gonna end up losing a lot more than one game. Like your fertility. 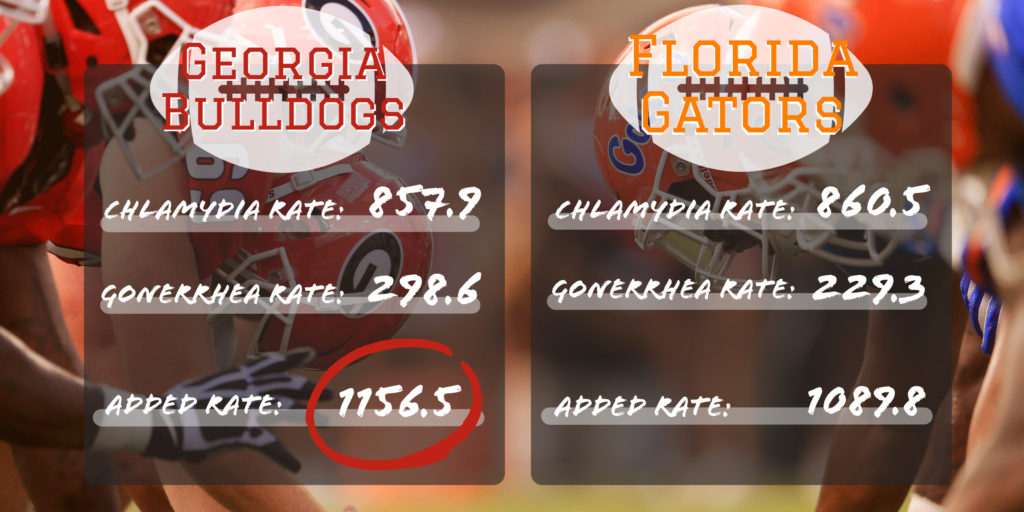 Rather than make a pun about… bulldogs, Georgia’s beating Florida with higher rates, but just barely.  So… Both of you are dogs. Oh, also, your counties are among some of the highest rates of STDs. Yikes. There is so much protection used on the field, why not bring that mentality into the bedroom? 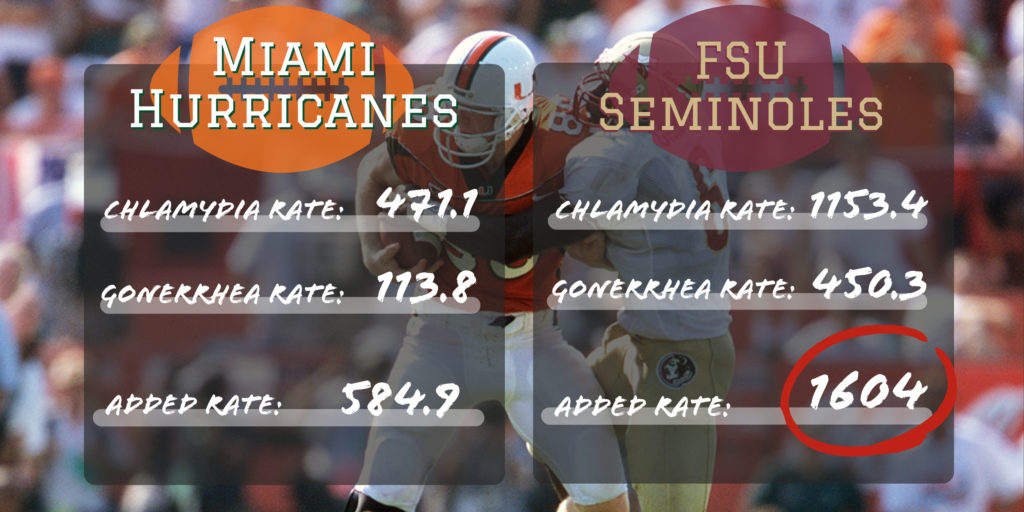 It’s an unmistakable win by the highest rated STD-transmitting college on this list: Florida State. These schools really make the puns too easy to make. Seminoles. Easy semen pun right there. We don’t even need to change it. It’s…it’s just perfect. It’s likely some of these Semenoles have some loads overrun with bacteria. It’s highly highly highly recommended to get those seminal loads tested, you scholars. It’s better to deal with it than lie to yourself that it couldn’t ever happen to you (“I’m not that kind of guy/girl”). 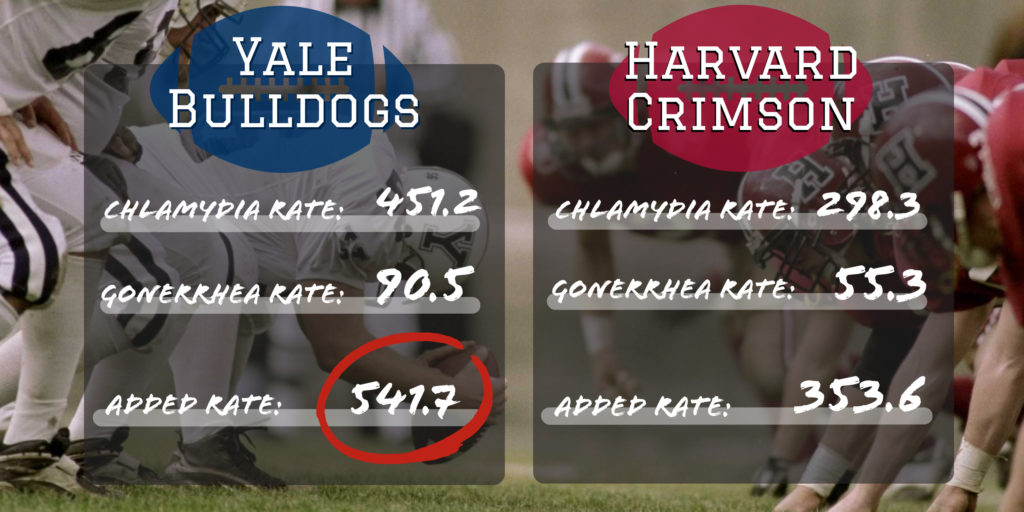 But, like in any truly competitive sport, there’s always a number one. These brainiacs come close but there is a winner… before we tell you who it is, we have to say there seems to be a trend in CDC’s data: The northern colleges tend to have the lowest rates of gonorrhea and chlamydia (aside from Ohio). So, it’s not surprising that these guys have such a low rate of STDs. But okay, anyway, we have another bulldog win on the northeast, out of these two Ivy leagues, Yale’s got the higher score. 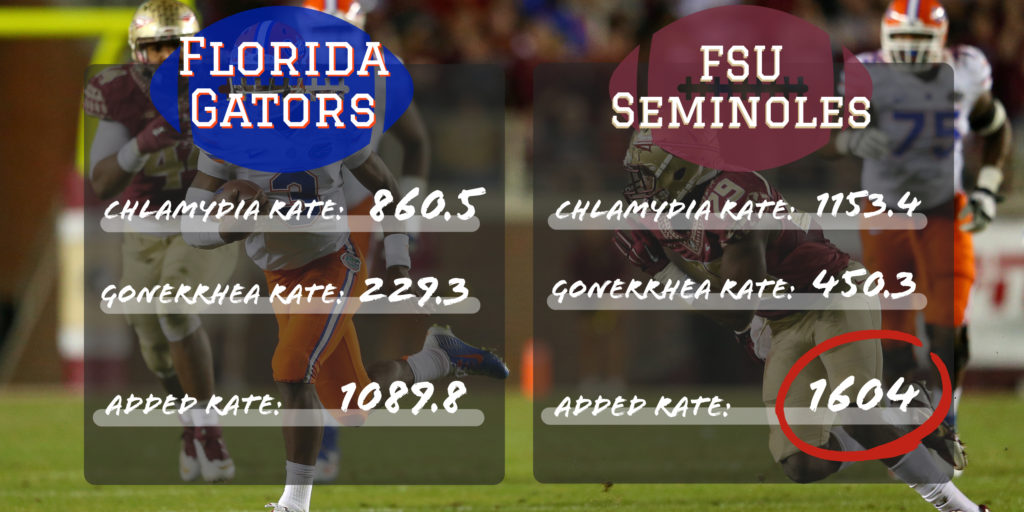 We’ve seen these two schools against other rivals, so I’m sure you guys can make an educated guess here. Yup. The Seminoles make another victorious appearance on this list. You truly dropped the balls on this part of college, Florida State. 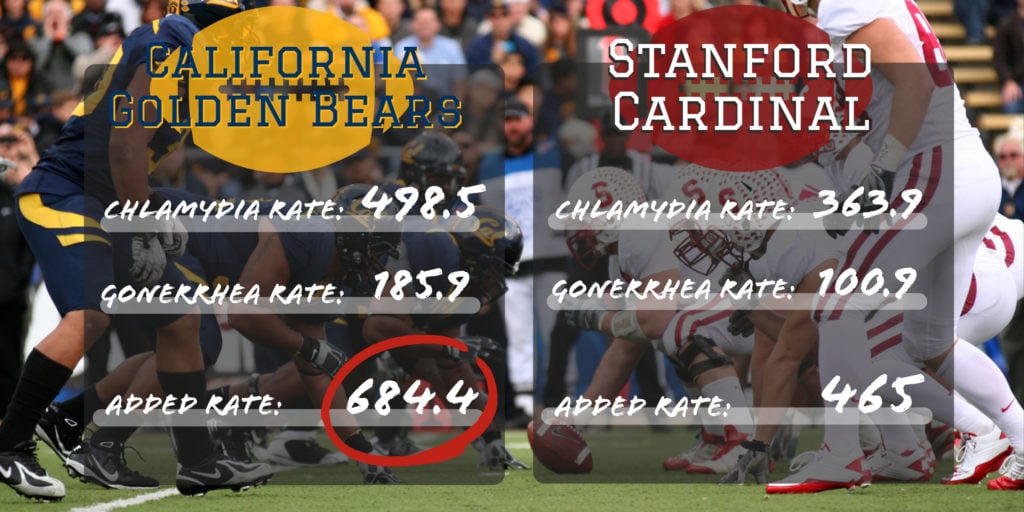 While Stanford students were the villains behind this fictional paper, the CDC’s numbers are no joke. Here marks another “win” by the California Bears. This is not a drill.I’m sure these two schools have heard of that one morning of November 1982 when Stanford students took matters into their own hands. It was four days after the annual Big Game when the California Bears proudly won 25 – 20 over the Stanford Cardinals. That fateful morning, the Bears found their Daily California newspapers boasting the shocking headline, “NCAA awards Big Game to Stanford.” The score was reputedly amended to 20 – 19 and, as you can imagine, changing the outcome of THE Big Game was criminal! The Bears ran around with their papers some shocked, some enraged, and those aware of the prank just laughed at those with baffled reactions. 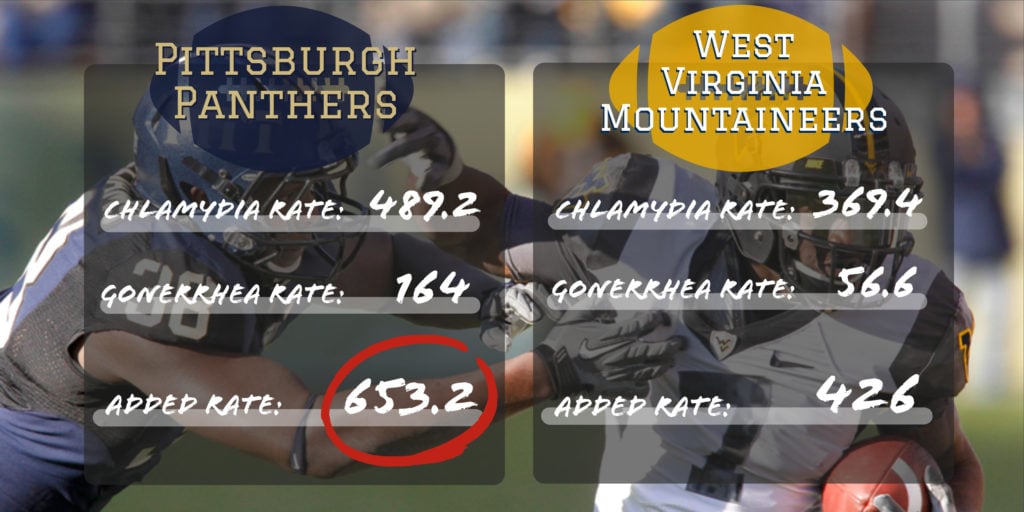 This rivalry is one of those fancy ones with a whole name and a sophisticated logo for their rivalry. Oo-la-la. But, alas, no matter the bells and whistles, these schools are just as prone to STDs as anyone else. In this case, Pittsburgh, you are the winner. So, if your panther is starting to look like a cheetah, then it’s time to get those spots checked out.

This is the end.

Now, because we care, here comes the lecture but we’ll make it short and sweet for you guys. STDs (except HIV & herpes) are curable when spotted early on! Most of the time, they can be the ultimate ninja and cause no symptoms which allow the disease to hide and cause harm without alerting you. The only sure way to know and protect yourself is to get tested regularly. You don’t want these infections to advance and cause irreparable damage on your body.

Yes, college is a time of your life where you are free to find who you are, what you like, and what you stand for. But, while you’re out there swiping left or right on the latest dating app or competing in whatever sport you’re into, take a moment to think about your gonads. If they’re important to you now, you better believe they still will be when gonorrhea is finally flaring up on your naughty bits.

Use protection and get tested regularly. STDcheck.com has thousands of locations so that literally all of these students should be aware of their status. Results come in 3 days and treatment is also available through us. Try it out. It’s not complicated and all will be totally fine. We promise.

If you want your university to join our free HIV testing program, click here to sign up.

* This data was provided by the CDC’s 2016 survey of the chlamydia and gonorrhea rates per 100,000 people. We realize that not everybody in the county attends these schools and that these results may not be 100% accurate. Regardless, the rates per county are fact. 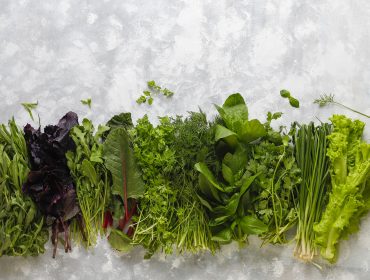 Who Was Dr. Sebi and What Did He Have to Do With STDs? 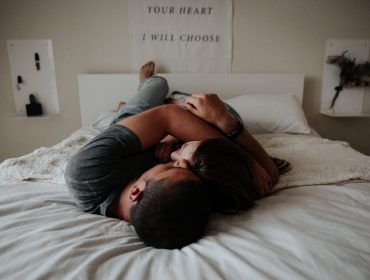